The extension of the body axis is an essential morphogenetic process in vertebrate development. We are studying the physics of body axis elongation in zebrafish with the goal of understanding how cells sculpt the tissue into its functional morphology. Using magnetically responsive microdroplets to measure local mechanical properties in the developing tailbud, we show that vertebrate body elongation entails spatially-varying tissue mechanics along the anteroposterior axis. Specifically, the tissue behaves as a viscoelastic material with lowest tissue stiffness (at short timescales) and viscosity (at long timescales) at its most posterior end, where the tissue extends. 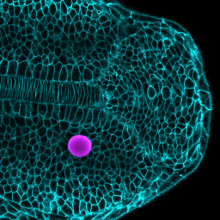 Magnetic droplets as mechanical actuators and micro-rhometers in living tissues

The mechanical properties of the cellular microenvironment have been shown to critically affect several cell behaviors that are central to embryonic development and disease processes, including cancer. Measuring the mechanical properties that cells perceive in 3D multicellular systems, such as developing embryos or the progression of tumors, has been very challenging. We have developed magnetically responsive microdroplets that enable the application of controlled forces and the measurement of endogenous mechanical properties within developing 3D embryonic tissues and organs, thereby opening new avenues to approach mechanobiology questions in the native environment of cells. 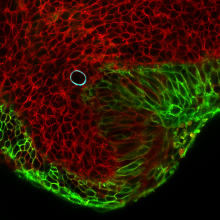 Cell-generated mechanical forces play a critical role during tissue morphogenesis and organ formation in the embryo. However, little is known about how these forces shape embryonic organs, mainly because it has not been possible to measure cellular forces within developing 3D tissues in vivo and in situ. We make use of oil microdroplets, similar in size to individual cells, with defined mechanical properties and displaying ligands for cell surface adhesion receptors, as force transducers in living embryonic tissues. 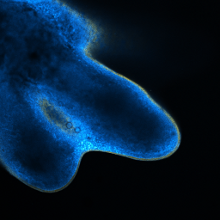 Cells are known to differentiate in response to specific biochemical cues. It is unclear though if mechanical cues can instruct cells to differentiate during embryonic development. In collaboration with the group of Jerome Gros at the Institut Pasteur (Paris), we are mapping the spatial variations in endogenous cellular forces driving vertebrate limb formation while simultaneously monitoring cell type specification. Our goal is to determine if the endogenous forces drive chondrogenic differentiation in developing vertebrate limbs. 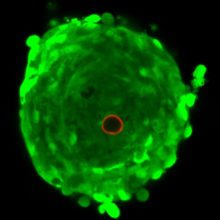 Multicellular aggregates, and specially spheroids, are a unique in vitro system to study the dynamics of multicellular 3D systems. We are studying the physics of spheroid growth for both healthy and malignant cells. Our goal is to reveal how endogenous mechanical cues affect tumor progression. To this end, we are using microdroplet-based techniques to quantify how cellular forces vary in space and time as the system grows. 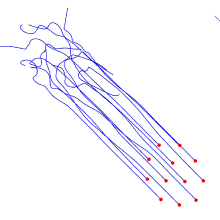 Embryonic development relies on different modes of collective cell migration, from the movement of small groups of cells to large-scale cell migrations. We are studying from a theoretical perspective how the different types of collective migration emerge from the physical interactions between cells. This project is a collaboration with the group of Prof. Francesco Bullo at UCSB. 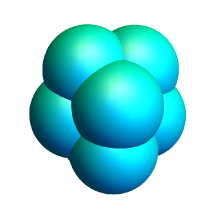 At very early embryonic stages, the communication between the few cells (blastomeres) composing the embryo depends critically on the topology of cell-cell contacts and the geometry of cellular packings. We are studying how the physics of cellular interactions generates the topological and geometrical patterns that characterize embryos at these early stages. 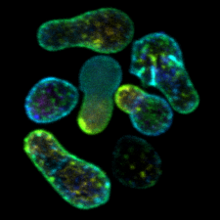 Walled cells, such as those of plant, fungal and bacterial species, need to remodel their wall to establish and change their shape during growth. Using budding yeast (Saccharomyces cerevisiae) as model system, we are currently studying how the mechanics of the cell wall and the intracellular processes in charge of building the wall interplay to shape the cell. This project is a collaboration between the Campàs lab and the groups of Linda Petzold and Tau-Mu Yi at UCSB.